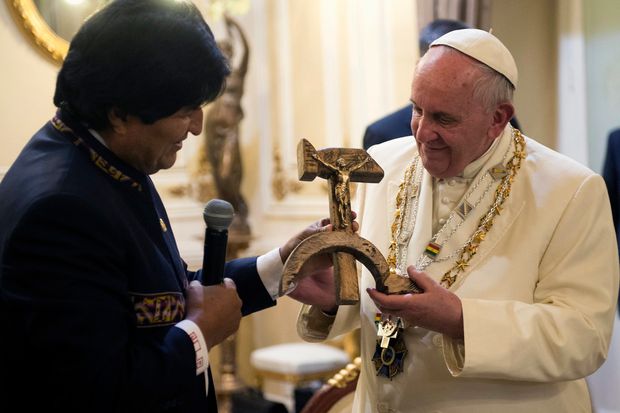 Marx’s line about the ‘opium of the people’ only hints at the ideology’s hostility.

Bolivian President Evo Morales, when meeting Pope Francis a few years ago, presented the Holy Father with a crucifix mounted on a hammer and sickle. The stunt prompted a debate that never seems to go away, whether it takes place on the world stage or in obscure religious journals: Is there a religious case for communism?

No amount of hope or hermeneutic effort can cleanse communism’s record of blood—especially the blood of religious adherents. Every communist regime has sought to purge the faith of its people. An atheistic ideology, communism is not only irreligious but antireligious.

The communist hatred of faith is a feature, not a fault. Karl Marx said so himself. Most are familiar with his line that religion is the “opium of the people.” What follows is even more pointed: “The abolition of religion as the illusory happiness of the people is the demand for their real happiness.” Criticism of religion is “the criticism of that vale of tears of which religion is the halo.” Religion may show man’s longing for a better existence, Marx argued, but it also prevents that dream from becoming reality.

Communist regimes put Marx’s principles into practice, starting with the first Marxist state. Between 1917 and 1921, the Soviet Union destroyed nearly 600 Russian Orthodox monasteries and convents. The leaders of the first communist country oversaw the killing of at least 300 Orthodox clergy. This bloodbath eventually became Soviet policy. The Eighth Party Congress decreed in 1920 that “the Party aims at the complete destruction of links between the exploiting classes and . . . religious propaganda, while assisting the actual liberation of the working masses from religious prejudices.”

The scholar Todd M. Johnson estimates that Soviet authorities sent 15 million Christians to their deaths in prison camps between 1921 and 1950. A further five million Christians perished in the following 30 years. The Soviet Union also targeted Muslim communities for mass deportation, killing, for example, as many as 46% of Crimean Tatars. Thousands of Buddhist monks also died at Soviet gunpoint. Where religion survived in the U.S.S.R., it did so secretly—or under the watchful eye and controlling hand of the state.

Central and Eastern European communist states also suppressed religion. Perhaps best known are the Polish communist attacks on the Catholic-driven Solidarity movement in the 1980s. Today North Korea reserves some of its harshest treatment for those found in possession of Christian Bibles. In Venezuela and Nicaragua, satellites of communist Cuba, Christian communities are viewed as a threat to the dictatorships and have been targeted for punishment.

Communist China is today’s worst offender. Since its founding, the People’s Republic of China has tried to control or eradicate every religion within its borders. Some, like Tibetan Buddhist monks, regularly face arrest, imprisonment or even death. Others, like Falun Gong practitioners, have their organs forcibly harvested for the benefit of party officials and foreign medical tourists. Christian churches are either shut down or forced to preach the party line. This includes the Catholic Church, which recently struck a deal with Beijing that allows the Chinese Communist Party to approve the selection of bishops and priests.

Modern communism’s inherent hatred of religion has perhaps found its most brutal demonstration in China’s treatment of the Muslim Uighurs. Since the time of Marx, the communist goal has always been the creation of a “new man.” That is the sole purpose of the so-called re-education camps in the province of Xinjiang. As many as three million Uighurs—more than a quarter of the population—have undergone political brainwashing in these camps. The goal is to strip them of their faith and culture, making them “fit” for the Chinese socialist system. As investigative scholar Adrian Zenz notes, those who are released from the “re-education” camps are most likely to be put into forced labor camps, which also continue to maintain regular ideological training in Marxist thought.

Most faiths call their adherents to look up past the things of this world. In communism, this world is all there is—a world of productivity and material goods, but nothing else. Thus the regimes that rule in its name seek to destroy the soul and deny any freedom of conscience. Faith, hope, charity and forbearance are dangerous ideas for a system that relies on fear and envy. And what is dangerous must be destroyed. To create the communist heaven on earth, the faithful must abandon their beliefs or endure a living hell.

Mr. Smith is executive director of the Victims of Communism Memorial Foundation in Washington.